We are excited to be participating in this year’s 401Gives! Please support us by visiting 401gives.org on April 1. ANY donation — even $1 — is greatly appreciated!

Questions? If you have any questions or would like more information, please contact us! Thank you in advance for your generosity to our organization!

The James D. Rielly Foundation will be holding its third annual “Cruise-In for a Cause Charity Car Show and Toy Drive” to benefit the children and families of our military, law enforcement, and first responders on Sunday, August 16, 2020 at Mount Hope Farm in beautiful Bristol, Rhode Island.

Included in the show will be cars of every kind: Antiques, Classics, Muscle Cars, Hot Rods and Special Interest cars of all types and sizes. Food trucks, a 50/50 raffle, and music by Cruisin Bruce Palmer will make this day one to be remembered.

Commemorative dash plaques and goodie bags for the first 30 cars and trophy for Best of Show!

The event will conclude with a cruise through Bristol’s beautiful Colt State Park alongside Narragansett Bay.

Come and enjoy the weather and support a great cause. Bring the family and spend some time after the event exploring the quaint shops of Bristol.

For more information about this event or how you can help support the work of the James D. Rielly Foundation, please contact us.

Can’t attend, but would like to donate? No contribution is too small. Your gift is 100% tax deductible and will help bring unconditional love, hope, and joy to families in need.

James D. Rielly Foundation Board Member, Jodi Leffingwell and her daughter Abbey put together this wonderful video thanking everyone in our community who are on the front lines making sure we stay safe and healthy and have access to essentials.

They are the real heroes!

Music sung and performed by Jodi and Abbey Leffingwell

Michael Rielly, founder and president of the James D. Rielly Foundation has been inducted into the prestigious International Santa Claus Hall of Fame.

Providence, RI USA (PRWEB) – 12/22/2019 – The James D. Rielly Foundation, announced today that founder and president Michael Rielly, has been named to the International Santa Claus Hall of Fame for his contributions to the Santa Claus community and his charitable work as Santa Claus.

Located in Santa Claus Indiana, the International Santa Claus Hall of Fame is the home of the celebration and study of famous Santa Clauses and Mrs. Clauses of the past and present. This ongoing project is meant to preserve the historical documentation of the many men and women who have greatly contributed to the Legend of Santa Claus.

Nominees were evaluated on eight criteria: overall career, range of appearances, length of service, uniqueness of career, charity, originality, contribution to the Santa world, and service to their community.

A resident of Bristol Rhode Island, Michael Rielly has been described as “Rhode Island’s premier Santa” and an “expert in Santa Claus and all things Christmas”.

“It’s a great honor to be recognized by the International Santa Claus Hall of Fame, and I’m humbled to be included in the company of such great Santas and Mrs. Clauses,” said Michael Rielly. “I truly feel blessed”.

In 2010, Michael Rielly’s grandfather, James D. Rielly, also of Bristol RhodeIsland, was one of the inaugural inductees into the International Santa Claus Hall of Fame.

Michael Rielly founded the ClausNet Santa Claus Network in 2007 – the largest community and resource for men and women actors dedicated to the traditions and faithful portrayal of Santa Claus, Mrs. Claus, and all others who devote their time to bringing the magic of Christmas to children of all ages throughout the world.

For more information about the International Santa Claus Hall of Fame, visit www.santaclaushall.com.

There’s a real life Santa Claus living right here in Rhode Island. Michael Rielly is from Bristol, Rhode Island, and he donates his time and talent to those who are in need by making appearances as Santa Claus.

Representing Santa is a Rielly family tradition that was started by Michael’s grandfather, James D. Rielly, during the Great Depression. In 2017, Michael established a nonprofit in his grandfather’s name to preserve his legacy and continue his work of spreading holiday cheer.

Join us for Cruise-in for a Cause 2!

The James D. Rielly Foundation will be holding its second annual “Cruise-In for a Cause Car Show” to benefit Veterans and the children and families of military personnel and first responders on Sunday September 8, 2019 in the beautiful bay-side town of Bristol, Rhode Island.

Included in the show will be cars of every kind: Antiques, Classics, Muscle Cars, Hot Rods and Special Interest cars of all types and sizes. A 50/50 raffle and music from the 1950s and 1960s will make this day one to be remembered.

We are very excited to announce that we will be participating in this year’s Amica Mutual Insurance Co. Downtown Jingle 5k!

For years, children all over the world have been sending letters to Santa Claus. During the 1950s through the 1980s many of those letters were delivered to Jim Rielly’s house in Bristol Rhode Island.

Over the years the post office delivered hundreds of letters to Jim’s home. And in true Santa Claus style, Jim would reply to each and every one.

Today, on the anniversary of the September 11 terrorist attacks, we honor our police, firefighters, EMTs, and all those who serve and have served in our armed forces. Day in and day out, these brave men and women put their lives on the line to keep us safe. But what makes these folks even more special, is that they go to work for their communities’ every day without expecting recognition.

We believe that September 11 is the perfect day to show them our gratitude for their service. Here are four ways you can thank the first responders and military personnel in your community.

TELL THEM IN PERSON
When you see a firefighter, police officer, EMT, or military personnel, thank them. It doesn’t have to be a long speech. Something as simple as “Thank you for your service” will go a long way at showing them that you appreciate them.

PUT IT IN WRITING
One of the most powerful ways you can thank our first responders is to put it in writing. Send a hand-written card or letter to a local police or fire station. If you want to make a bigger impression, gather several letters and cards from the community and deliver them personally. You would be surprised the power of writing a simple “thank you” card has.

PAY FOR THEIR ORDER
Maybe they are sitting at a table across from you at a restaurant, or behind you in line at the grocery store, or the drive-thru. Consider paying for them. It’s a small thing, but it makes a big impact.

DONATE
You can show your support by donating to or supporting organizations whose purpose is to support first responders, military personnel and their families.

First responders and military personnel serve our communities daily and do so without expecting any gratitude. While we encourage everyone to appreciate what these individuals do each day, please take a moment on this anniversary of the 9/11 attacks, to recognize the men and women who continually and tirelessly serve to keep us safe. 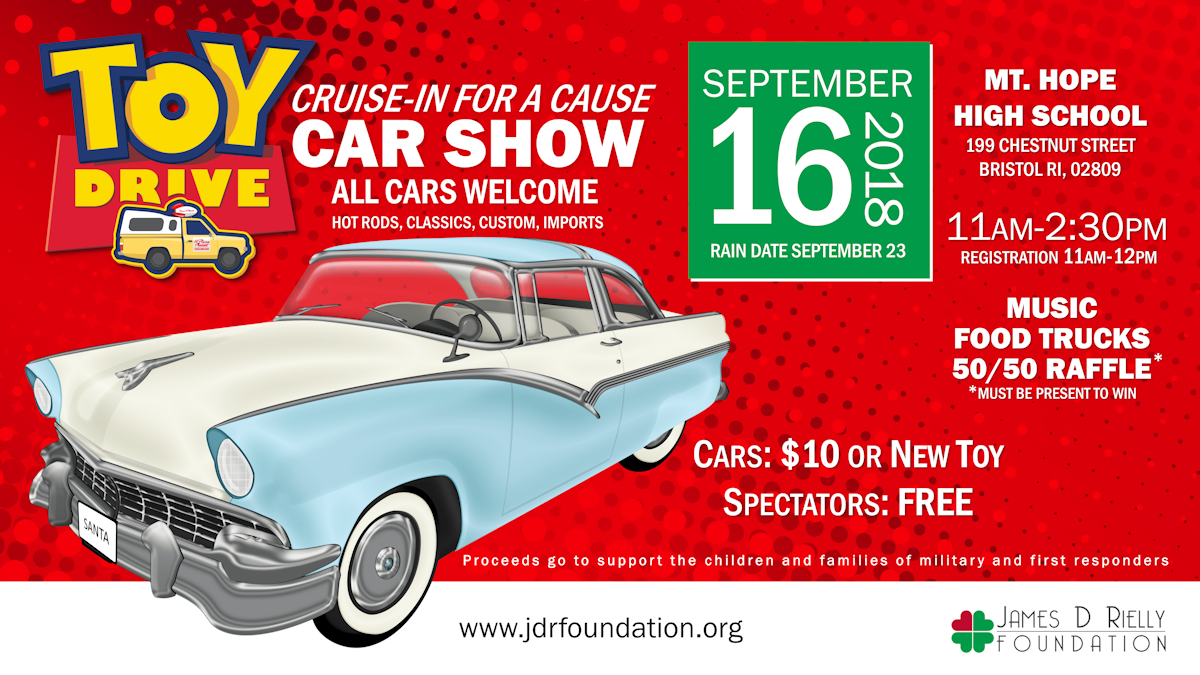 Join us for Cruise-In for a Cause!

The James D Rielly Foundation will be holding its first annual “Cruise-In for a Cause Car Show” to benefit the children and families of the military and first responders on September 16, 2018 in the beautiful bay-side town of Bristol, Rhode Island.

Included in the show will be cars of every kind: Antiques, Classics, Muscle Cars, Hot Rods and Special Interest cars of all types and sizes. A 50/50 raffle and music from the 1950s and 1960s will make this day one to be remembered.